MONMOUTH, Ill. – At 9:30 on a cloudless, mild Saturday morning, 16 eager red-shirted Monmouth College student workers lined the circle drive between Fulton Hall and Graham Hall, waiting for new arrivals. After a few moments, red-clad members of the football team blended into the ranks.

Soon, a silver pickup pulled into the drive, carrying the belongings of incoming freshman MacKenzie Baker of Aledo, Ill.

In less than five minutes, the truck’s contents, including a refrigerator, totes, pillows and hanging clothes, had been carried to their proper room in Fulton Hall.

“She loves it here – she couldn’t wait to get here,” said MacKenzie’s mother, Angie Baker.

Mackenzie is familiar with the campus, as her older sister, Michaela, is a senior at Monmouth.

“It’s beautiful today,” said Angie. “When Michaela moved in three years ago, it was pouring down rain.”

MacKenzie plans to be a member of the Fighting Scots track team and investigate kinesiology as a major.

Across campus, another new student was moving in. Prospective business major Dakota Welsh, who played basketball for Monmouth-Roseville High School, was welcomed by members of the Ninth Street move-in brigade, including one of his future Fighting Scots teammates, Paul Engo III.

“I’m really excited about it,” said Welch of starting his new adventure at Monmouth. “I liked that Monmouth is local, not too far from home.”

As the College’s carillon struck 10 a.m., a dozen cars were lined up along Ninth Street, with students moving into Winbigler, Grier, Cleland and Liedman halls. President Dr. Clarence R. Wyatt was among the helpers, carrying a mini-fridge to a second-floor room in Grier.

In a normal year, Monmouth’s residence life staff and orientation leaders are enough to handle the move-in chores, but this year several athletic teams were involved, including more than 100 players from the football team.

“I thought it would make a tremendous positive impact on this freshmen class moving in to have our guys out there helping,” said Chad Braun, who is now in his third year as head football coach. “I have been extremely proud of the character and work ethic of this team to this point. We have great leadership from our upperclassmen.”

The football players were among the first students to return to campus for the fall semester, arriving Aug. 8. Also on campus for several days now have been other fall sports athletes, residence life staff, orientation leaders, members of Greek life organizations and the Fighting Scots Marching Band, and students participating in Summer Opportunity for Intellectual Activity (SOFIA).

In total, about 200 Monmouth students helped freshmen move in, according to Director of Campus Safety Andy Davis, who was making the rounds on a golf cart to ensure that move-in was running smoothly.

Nearby, Guillermo Hernandez sat on a wall outside of Grier Hall, taking a few moments to rest and soak in the atmosphere of the campus. His daughter, Aracely Hernandez, is a freshman from Chicago.

“It’s nice, it’s beautiful here,” he said. “This was the best selection for her.”

One of the first campus events members of the Class of 2021 participated in was the solar eclipse viewing on Aug. 21, held in front of the Center for Science and Business. 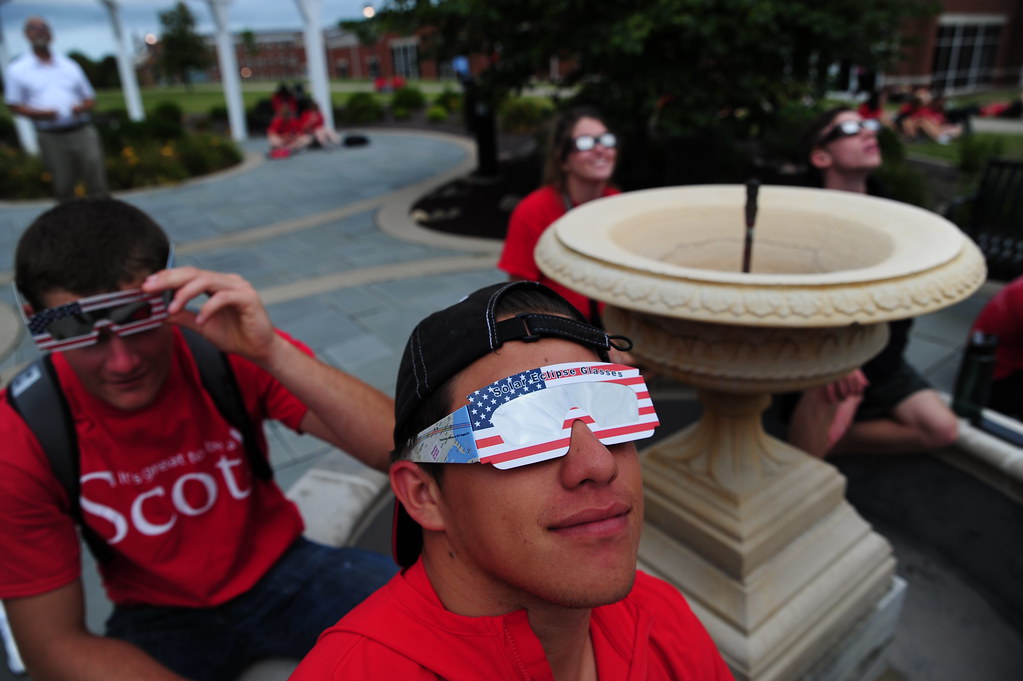