MONMOUTH, Ill. – As Monmouth College’s third annual Scots Day of Giving came to a close near midnight on Wednesday, more than 900 hearts filled the windows of Mellinger Commons on the first floor of the Center for Science and Business.

Each of those hearts represented a gift made to the College during a day when Tartan Nation showed its support from Florida to Alaska and from California to Maine.

Those 937 gifts totaled $255,664. Both figures smashed the Scots Day of Giving records set a year ago by more than 250 gifts and more than $32,000. The gifts will support scholarships for students and a half-dozen academic and student-life initiatives.

A giving record was also set by Monmouth faculty and staff. Thanks to faculty and staff gifts made during Scots Day of Giving, more than 60 percent of the College’s employees have made a gift this school year, which is a record among the 14-member Associated Colleges of the Midwest.

“It’s exciting to see this all come together,” said Associate Vice President of Development and College Relations Hannah Maher as the 18-hour, 53-minute event – used to recognize the College’s founding in 1853 – headed into its final hours. “The hearts take up almost the entire east side of the building. That visual representation is neat to see.”

The hearts theme was another nod to Monmouth’s history and traditions, coming from the line “a thousand hearts’ devotion to the school we love so well” in the College song “A Flame of White and Crimson.”

Maher said the number of 1,000 was also symbolic, in that each gift represented a current Monmouth student.

“This day is about telling the story of the College,” she said. “We spent the day reaching out for 1,000 alumni and friends to support the College and pay it forward to our 1,000 students.”

In addition to scholarships, the day included support for six initiatives. Three were created by Monmouth faculty: virtual reality equipment for the biology and kinesiology departments; a digital propaganda center proposed by communication studies faculty; and the Chorale’s 2020 performance tour of Vienna, Prague and Salzburg. The other three initiatives: support for the Fighting Scots Society athletics booster club; the senior class project to install more water-bottle fillers on campus; and the Parent and Family Council project to add more Scot Cruisers bicycles to campus.

As gifts poured in from each state, Maher was impressed by the widespread geographic commitment, and she noted that social media plays an important role in the broad reach.

“Through all our Facebook Live events and alumni events we have in other cities, there’s a feeling that everyone is on campus,” she said. “That’s an ability we have now. Distance from Monmouth doesn’t mean anything today. It’s been so great to see some of the comments on social media. As one example, we had more than 200 comments when we asked alumni about their favorite faculty member.”

Vice President for Development and College Relations John Osterlund noted that the energy level of the campus community was strong throughout the day.

“This is a marathon,” he said. “We got started at 4 a.m. But everybody is upbeat, positive and eager. Everybody just kinds of feeds off each other and feeds off that energy. Someone will get a gift commitment over the phone, and the cowbell will ring. It’s just a very celebratory, festive atmosphere.”

Osterlund said that Scots Day of Giving also helps support “the robust culture of philanthropy” among the College’s alumni, friends, faculty and staff.

“I was on the phones a lot today, and I talked with a great cross section of Tartan Nation – from alumni who’ve been out of school for decades to ones who were here just a few years ago,” he said. “Everybody’s contributing, everybody’s enthusiastic. Everybody wants to pitch in and help.”

Chorale director Tim Pahel was one of the many members of the campus community who worked the phones during the day.

“Fundraising for our international trip is really a huge help for the students,” he said. “Many struggle to afford it, so every bit we can raise helps more students go. We’re really looking forward to it. We are going to sing in some truly incredible cathedrals – cathedrals very much like Notre Dame. Just to sing there with those wonderful acoustics is going to be so special for our students.” 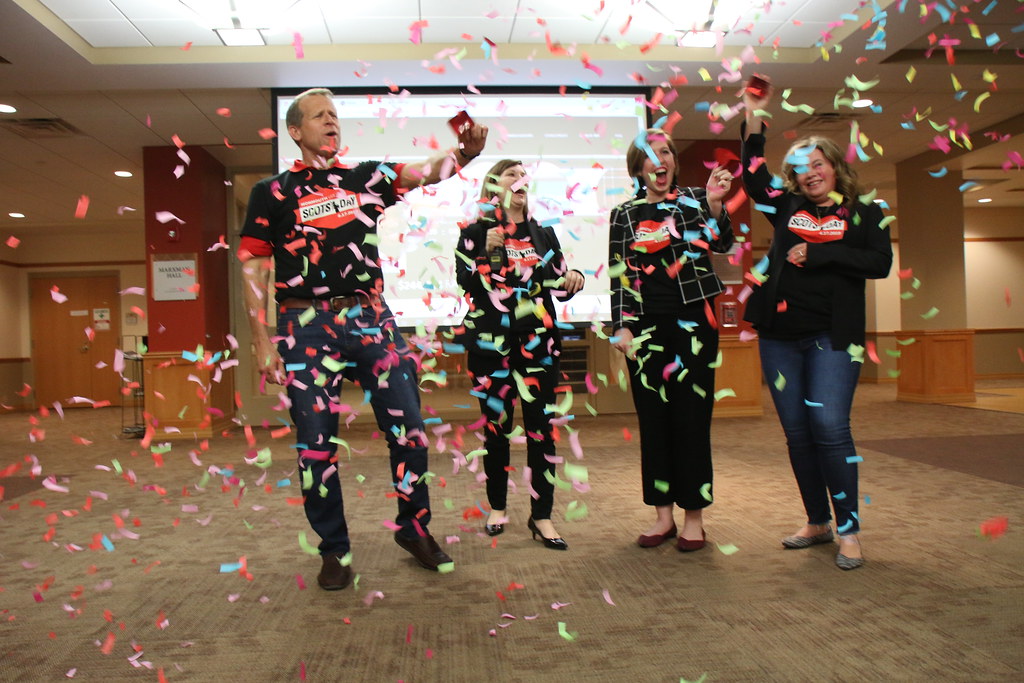