MONMOUTH, Ill. – The three artists featured in this spring’s Monmouth College Senior Art Exhibition are, essentially, storytellers, using painting, photography, graphic design and even clothing to tell their tales, which are based on real-life occurrences.

Together, the exhibited works of Julia Smith of Roseville, Illinois, Natalie Takahashi of Lisle, Illinois, and Mark Thigpen of Chicago are packaged under the title of “OMG!” Free and open to the public, their exhibition will be on display through May 4 in the Len G. Everett Gallery on the upper level of the College’s Hewes Library.

“The work from each of the senior artists is always so different,” said Monmouth art professor Stacy Lotz, accurately describing the 2022 show. “And yet, it always works together. You get it into this space, and they talk about who’s going to set up where, and they do it, and it sings. It really sings. Every year. I’m really proud of the work our students do. They really work hard for it, and it shows.”

Smith and Thigpen both chose to tell personal stories, while Takahashi takes viewers on a historical tour of fashion through the middle part of the 20th century.


Two sides of the story

“I always want to make art that’s mostly a storyline,” said Thigpen. “I have told my story in this series of pieces. I have this character as a way of showing me and the journey of what I am now, because as a kid, I wasn’t exactly at the greatest of times.”

MARK THIGPEN: Senior from Chicago depicted storyline in his works, based on his own life experiences.It’s a story with two sides, said Thigpen – a darker one featuring “depression, stresses and betrayal, with a dream world on the other.”

“As this character lives in both worlds at the same time, he’s going deeper and deeper into this dark side, and now he’s dreaming the other world at night,” he said. “Most likely, I’m going to start making more animations, more characters, to make this whole anime. I would really love to start a new story.”

If so, Thigpen won’t have to look too hard for possible storylines.

“It gives me an idea every single time when I go through life,” he said. “I use art as my escape.”

Smith could make that same statement, and also hopes viewers are inspired.

“When I was creating my work, I wanted to use it to process what I’ve been going through – the way I feel in my body and how it is all so confusing,” said Smith. “I also wanted to make others aware that there are people who feel they are more than one gender, people who are like me, and even though we may not always present ourselves a certain way, it is still important to be mindful of one’s pronouns and such.”

“When I was creating my work, I wanted to use it to process what I’ve been going through – the way I feel in my body and how it is all so confusing.” – Julia Smith


Smith took “candid” photos every day in an attempt to “create a casual feeling by taking the viewer into my daily, confusing life.”

“Working on pieces about the human body was a way of processing my fluidity. Being able to share such a personal topic in the form of painting, photography and poetry is what I hope to be: an inspiration to others who are also struggling with identity.”

It was essentially predestined that Smith would be interested in making art. Smith’s middle name is Monet, in honor of Smith’s mother’s favorite artist, the French painter Claude Monet.


‘Fashion through the Decades’

Monet hit his stride as an artist in the middle of the 19th century. For her work in the exhibit, Takahashi chose a time period 100 years later.

NATALIE TAKAHASHI: Her works in the exhibit are from a "Fashion through the Decades" project she completed for the Warren County History Museum.“It’s a series going from catalog pages of the 1930s through the 1970s, with a few 21st-century fashion advertisements that I’ve done for another class,” she said of her works. “I wanted my section of the gallery to feel like a department store and that you’re shopping. It’s a big collage of all these different decades clashing. I wanted it to look kind of old-timey.”

Her works grew out of a “Fashion through the Decades” project she did with the Warren County History Museum and its director, former Monmouth professor Alana Newman, whom she met with once a week for direction and inspiration.

“I worked on these pieces my entire senior year,” said Takahashi, who combined graphic design and photography to create the ads, using Monmouth students as models. “They’re all very similar, but I put my own personal touches into each one.”

Natalie Takahashi and Mark Thigpen discuss their work on the 1853 Podcast. 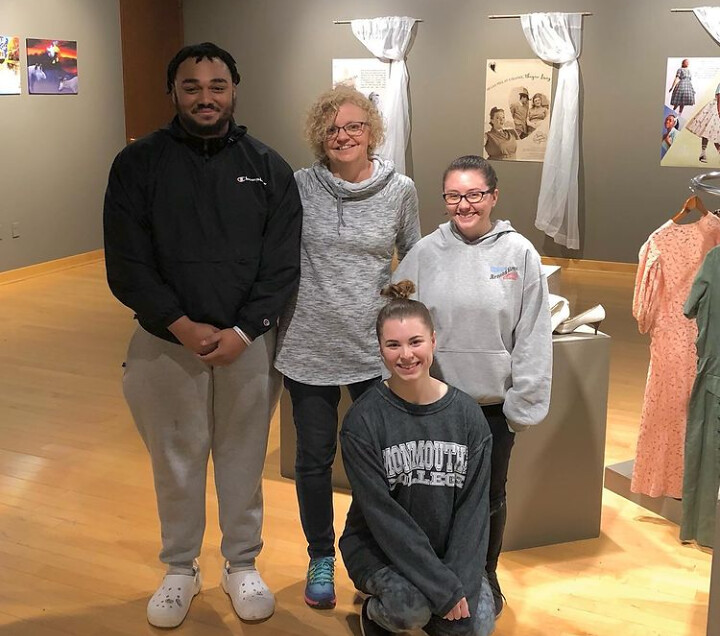