CONNOR DICKENSON: Senior artist poses with his award-winning sculpture, which symbolizes the support he recently received from his friends. MONMOUTH, Ill. – Recording artists have sung about it, and poets have written about it.

This semester, Monmouth College senior Connor Dickenson of Chatham, Illinois, created a sculpture about it, and it took home the Best of Show honor at the Annual Juried Student Art Exhibition, which is on display in the Len G. Everett Gallery in Hewes Library through Dec. 8.

Titled “The Friends Who Stayed,” Dickenson’s winning work depicts a person reaching out to another in need, who is on a ladder with a heart located above. It was inspired by the friends who came to his aid when he experienced hard times due to the end of a five-year relationship.

“A lot of my friends supported me, because I was pretty upset about it,” said Dickenson.

During an art class his sophomore year to fulfill the College’s “Beauty and Meaning” curriculum requirement, his professor, Stacy Lotz, had provided plaster to create molds, and Dickenson had made a heart.

“Instead of dedicating the heart to something upsetting, I decided to give it to the people who supported me. … I was honored just to have it accepted for the exhibit, and I was definitely excited when it won.” – Connor Dickenson ’22

Nevertheless, Dickenson stuck with art for his elective courses and stuck with Lotz. He found a place for the heart in a sculpture class he’s taking with her this semester.

“Instead of dedicating the heart to something upsetting, I decided to give it to the people who supported me,” he said. “Professor Lotz liked it a lot and encouraged me to submit it for the exhibit. I was honored just to have it accepted for the exhibit, and I was definitely excited when it won.”

Not bad for a student who’s not even an art minor, let alone a major. Dickenson is studying exercise science and is also enrolled in the College’s ROTC (Reserve Officers Training Corps) program.

Dickenson came to Monmouth to play football, but a concussion sidelined him his sophomore year. He was told continuing to play would jeopardize his military service plans, so he put playing sports aside. His GRFD (Guaranteed Reserve Forces Duty) scholarship is paying for his schooling and, upon graduation, he will be commissioned as a second lieutenant in the Illinois National Guard. Dickenson’s eight-year contract runs through 2028.

The juror for the show was retired West Central High School art teacher Cherry Galusha Simmons, a 1980 Monmouth graduate. Other category award winners she chose from the show were:

“It felt like I received an award to be a juror,” said Simmons. “I’m very privileged and honored to be here and to have a continued relationship with Monmouth College.”

“It felt like I received an award to be a juror. I’m very privileged and honored to be here and to have a continued relationship with Monmouth College.” – Cherry Galusha Simmons ’80


An additional honor, the People’s Choice Award, will be determined at a later date through social media voting. The honor is sponsored by the Buchanan Center for the Arts in Monmouth.

Monmouth art professor Stephanie Baugh serves as the gallery director for the College.

“My favorite thing to see is the variety of works,” she said of the student exhibit. “They represent a wide variety of topics and meaningful content. I think it’s just a very exciting show to see, as it is every year.”

Baugh said that for each artist, there is so much more that goes into creating a work besides putting paintbrush or pen to canvas, or shaping a piece of material.

“I believe that art brings together a number of really crucial components,” she said. “One of those is what I like to call the ‘hands-on, minds-on balance.’ It is not just that you are producing things and making things with your hands, but there is a high level of cognitive demand that comes into the work, not only on the creative side, but on the problem-solving side.” 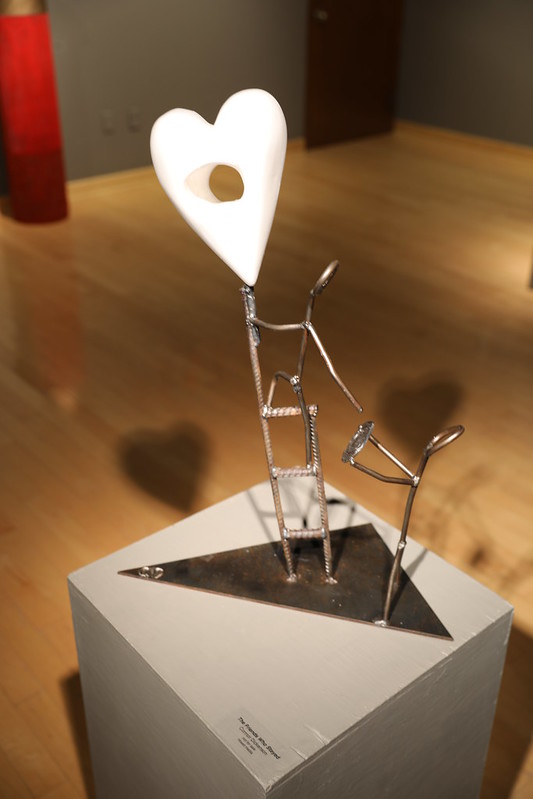