An Hello and a Goodbye

U.S. premiere of psychological thriller ‘Black Mountain’ to bring down the curtain on Fusion Theatre in downtown Monmouth.

BLACK MOUNTAIN: The Monmouth production of the play from the U.K. will be the first time that the psychological thriller has been staged in the United States.Quick will attempt to translate that feeling to the stage when he directs the U.S. premiere of Black Mountain Oct. 7-10 at the Fusion Theatre, 220 S. Main St.

“The play is about a relationship that is at a breaking point,” said Quick. “It’s about betrayal and about people seeking revenge. I can’t tell you any more than that. You have to come see it, but it’s about how we respond when we are hurt and the different ways we can process that. And either move on from it or sometimes not.”

Quick came across the script in 2018 while working at the University of Idaho.

“I was immediately hooked,” he said. “Never before had I read a play script that actually gave me chills. I had never been scared from reading a play before. I didn’t know that was possible. I instantly wanted to direct this show, to see if that feeling would translate to the audience – if a play could really be a thriller.”

Quick said the Fusion Theatre itself will add to that translation, as will an experiment with the production’s sound design.

“When I came to Monmouth and saw the Fusion Theatre, I thought this is the perfect venue – the small intimate space for a small, three-character psychological thriller like this. – Todd Quick

“When I came to Monmouth and saw the Fusion Theatre, I thought this is the perfect venue – the small intimate space for a small, three-character psychological thriller like this,” said Quick.

Playing those three characters are Allie Bryan ’22 of Abingdon, Illinois; Kaitlyn Fisher ’22 of Monmouth; and Elijah Lind ’23 of Walnut, Illinois.

Fisher and Lind are playing Paul and Rebecca, “the married couple that’s at the heart of this betrayal,” said Quick. “It’s been so much fun because Caitlin and Elijah are a real-life couple. So getting to see how that real-life closeness that they share has enhanced their work together on the stage has been a lot of fun to watch.”

During a typical production of a non-musical at Monmouth, there is only sound before the show and after, as well as during scene changes. That will change with the production of Black Mountain.

TODD QUICK: Director got chills the first time he read "Black Mountain" three years ago.“We’re taking a more cinematic approach,” said Quick. “So we have underscoring and atmospheric sound underneath the scene even while the dialogue is happening. We just started introducing that at rehearsal a couple of days ago and already you can feel how it’s sort of gotten under the skin of the actors and really helped propel their performances to the next level.”

Black Mountain has been performed in the United Kingdom, although Quick has not traveled there to see it.

“This is a play I’ve never even seen,” he said. “So it’s an exciting new challenge for me to direct something that’s only existed in my imagination so far. It’s not often in a small department like ours that we get to produce the U.S. premiere of such an exciting new work. It premiered in England, but this will be the first time it’s come across the pond.”

Quick said the production will be both an hello and a goodbye.

“This will be the farewell performance for the Fusion Theatre,” he said. “We won’t be using it as a performance space in the future. So I think it’s fitting that we have sort of an ending and beginning. We have a brand new American premiere of a British play as a way to say goodbye to this great little experimental theatre. So hopefully everyone will come out and give the theatre a proper send-off.”

Monmouth College will present “Black Mountain” at 7:30 p.m. Oct. 7-9 and at 2 p.m. Oct. 10 at the Fusion Theatre, 220 S. Main St. Tickets can be purchased online. Tickets are $10 for adults, $8 for seniors and students, and $6 for students and faculty with a Monmouth College ID. The production features adult themes and strong language. 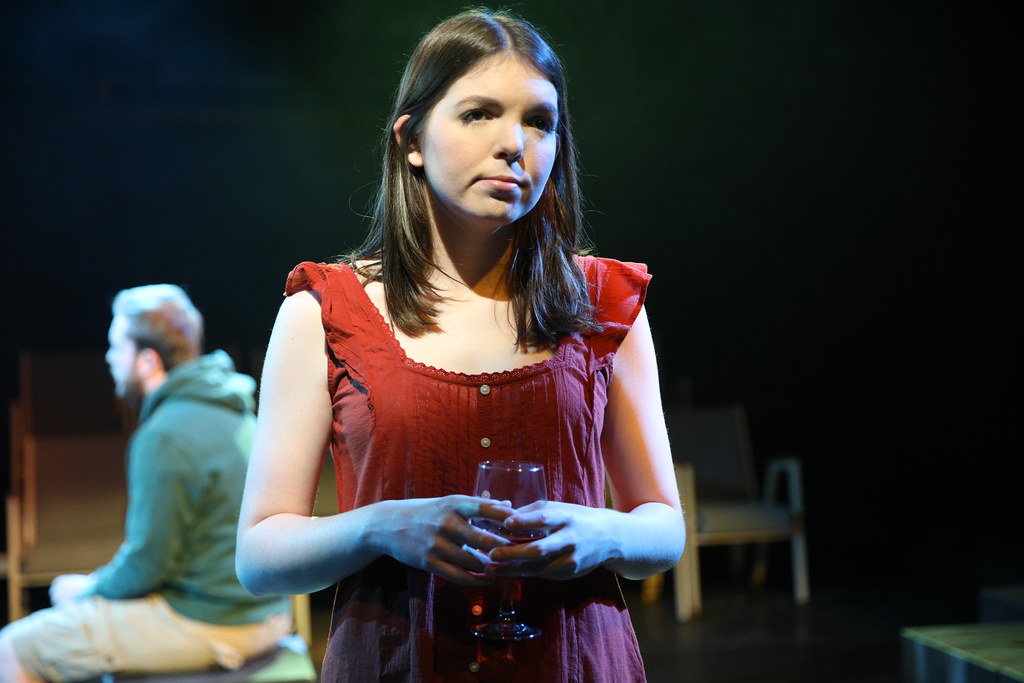