Students ‘Excited to be Back’ on Campus

New students arrive on campus ‘nervous, but excited’ for start of fall semester.

MONMOUTH, Ill. – Shortly after 9 a.m. Saturday, not a parking place could be found along North Ninth Street as families arrived to move their sons and daughters into the residence halls on the east side of Monmouth College’s campus.

In front of Grier Hall, an incoming Monmouth freshman and her father teamed up to carry in a mini-fridge, walking past a four-foot-tall teddy bear, a desk fan and an assortment of suitcases, totes and supplies, such as bottled water and sports drinks.

“I’m nervous, but excited,” said Brooke Carlson, another freshman who was moving into her room in Grier Hall, which she’ll share with junior transfer Maddie Bowermaster of Chillicothe, Ill.

“I was nervous coming here, but now I’m not so nervous anymore,” said Bowermaster, who attended Illinois Central College the past two years.

Both students addressed going away to college at a time when the COVID-19 pandemic is still very much at the forefront of people’s minds.

“One of my classes got moved online, but I really hope the rest are in person,” said Bowermaster. “I’d rather have them that way. Wearing a mask in school is all right with me.”

Carlson said: “You just really have to wash your hands and social distance, and everything will work out fine.”

‘Faculty is really on top of things’

To prepare for new students’ arrival on Saturday, College officials posted traffic patterns in residence halls and classroom buildings; took temperatures of all students and their guests before a limited number of people were allowed to move students into residence halls; and new-student orientation events were moved either into a virtual or socially distant format. Almost two dozen outside classrooms and four tented classrooms have been marked on campus for fall classes.

“Everyone did a great job Saturday coming together to prepare for and welcome our students,” said Associate Vice President of Student Life and Co-Dean of Students Michelle Merritt, who helped check temperatures of new students and guests who moved into residence halls along North Ninth Street. “Students and their guests were super cooperative with us, and they thanked us for all of the measures we have taken to create an environment that is as safe as possible during this challenging time.”

Along North Ninth Street, Kai’Shawn Curry had recently arrived at his residence hall from Belle Glade, Fla. In a typical year, he would have already been on campus, arriving a few days earlier to begin Fighting Scots football practices.

“It’s exciting,” said Curry. “I’ve already met some of the other football players.”

His father, Shawn Curry, was asked about sending a child away to college during this time.

“Students and their guests were super cooperative with us, and they thanked us for all of the measures we have taken to create an environment that is as safe as possible during this challenging time.”
– Michelle Merritt, co-dean of students

That sentiment was shared by Sal Alvarado of Oak Lawn, Ill., who was moving in his son, Sal Bruno Alvarado.

“I have no concerns,” he said. “It seems that the Monmouth College faculty is really on top of things, which parents like me really appreciate. I’m very happy, very excited for him to start his new journey. We’ve heard a lot of good things about Monmouth.”

‘Excited to be back’


At the far south end of the North Ninth Street residence halls, a trio of returning Monmouth juniors was waiting for their next student to help.

“I’m definitely excited to be back, seeing my friends,” said Elizabeth Gustafson of Kewanee, Ill. “I’m a little nervous about how things are going to go, because you just never know. But I’m happy the College is taking (the pandemic) seriously.”

“We want to be here on campus,” she said of the majority student opinion. “It’s good to see that students are already talking about it, saying things like ‘Hey, where’s your mask, friend?’”

The third member of the group, Loryn Beal of Pontiac, Ill., was asked to look back to March, when the College was forced to send students home for the rest of the spring semester.

“I was devastated. I was so sad,” she said. “Being at Monmouth College, you realize that so many people you love are here. So when we were told we had to go home, it was terrible. But I knew it was what had to be done so that we could come back this year. I thought the school handled it really well, and they’ve been really good about communicating information to us.”

Family members follow directional signs on the floor of Grier Hall while moving a student into the residence hall Saturday morning. 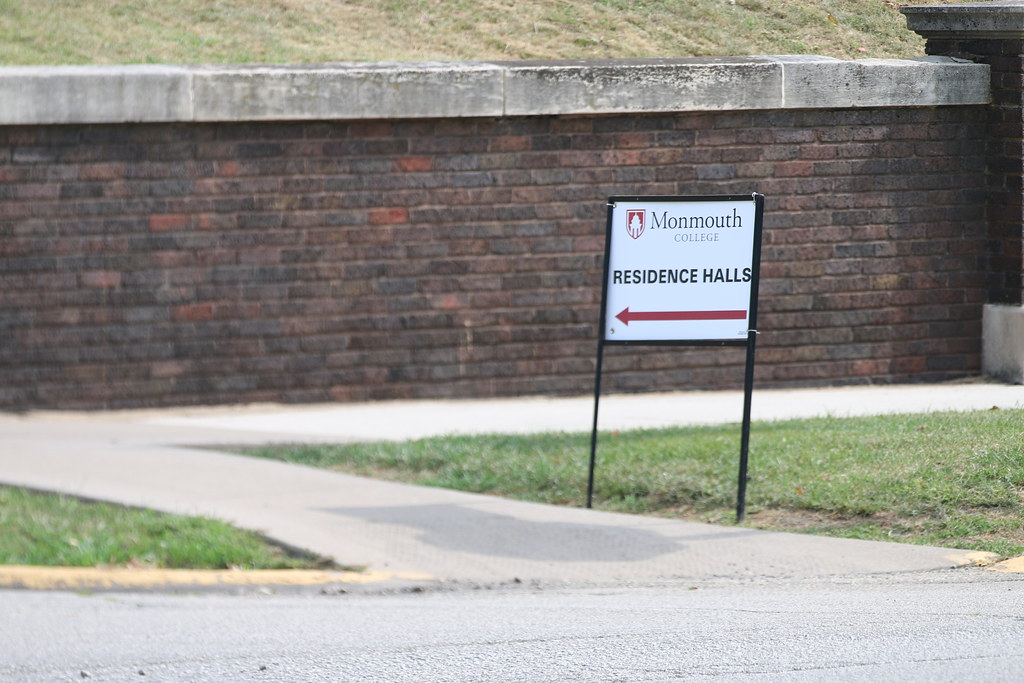